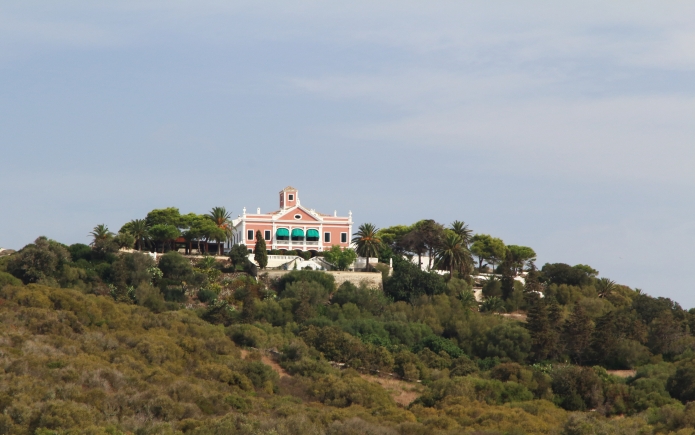 The photo above is of “Golden Farm”, a beautiful building high on the northern slope of Port Mahon Harbor. Some reports say that Nelson stayed here while visiting Minorca in HMS Foudroyant.  Menorca tourist guides and and the occasional publication will also refer to it as Nelson and Lady Hamilton’s “love nest.”  The fog of legend once again clouds the immortal memory.

I tried to sort through this issue while I was in Minorca (the historic name of the Island until recent time).  Nelson did visit Minorca in 1799 for the purpose of convincing Minorca’s military governor, General James Erskine,  to give him troops for the siege of Malta.  Nelson’s diary indicates that he arrived in Mahon on October 12 of that year.  It’s also clear that Lord and Lady Hamilton stayed behind in Naples.  There’s correspondence between Nelson and Ambassador Hamilton where Hamilton reports on his wife’s health and passes on her greetings to Nelson.  Nelson’s diary confirms that, except for a visit to General Erskine and the Naval Yard, he did not leave his flagship.  As one historian concludes, the documentary evidence shows the story about Nelson and Lady Hamilton enjoying a romantic sojourn in Minorca to be “a fairy tale.”   Still, it’s a good story and an 1813 map identifies the place as both the St. Antonio convent and Golden Farm.  Unfortunately, my stay in Minorca missed the weekly tour of Golden Farm, so I only saw it from afar. 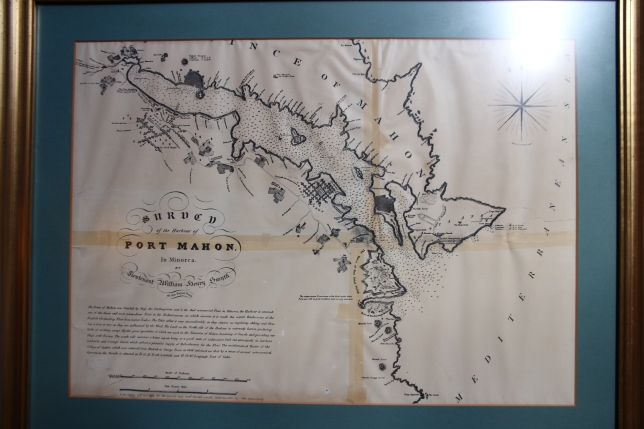 Plenty of real naval history occurred at Minorca.  Along with Gibraltar, the British took over Minorca in 1708 during the War of Spanish Succession.  One of the Royal Navy’s blacker episodes occurred there in 1756.  England was engaged in one of its seemingly interminable wars with France, and it feared a French invasion of Minorca.  The admiralty sent a relief squadron under the command of Admiral John Byng.  By the time he arrived at the Island, the French had conquered all but Fort Saint Phillip,  a fortress at the mouth of Port Mahon, where a British force still held out under siege.  Byng joined battle with a roughly equal French naval squadron and fought it to a draw, but then withdrew his battered fleet to Gibraltar for refitting.  Shortly thereafter Fort Saint Phillip capitulated.  Byng became a scapegoat for George II, the government, and virulent public opinion.  Far worse, he was court martialled and executed by firing squad.  History regards this episode as an injustice and a disgraceful stain on a naval officer’s life and honor.  Voltaire famously wrote that Byng was shot “to encourage the others.” Rightly or not, some attribute the Nelsonian fighting spirit as a reaction to the Byng affair.

On a more positive note, Minorca became the location of Collingwood House, a mansion overlooking the harbor that now survives as the Hotel del Almirante, where I stayed during my time in Minorca.  The house and hotel take their name from Cuthbert Collingwood, who succeeded Nelson as C-in-C Mediterranean after Trafalgar.  The current owner has turned the hotel into a museum filled with art and antiques celebrating Collingwood and his Royal Navy heritage, including a touching story about Collingwood’s dog, “Bounce.”  It doesn’t matter too much that Collingwood actually spent very little time there. Although he was stationed at Port Mahon for various times between 1798 and 1810, he spent most of the time on board ship.  It appears his longest time in the house came at the end of his life when, ill and worn out from his duties, he stayed two weeks before setting sail for home and his family.  Alas, he died the next day within sight of Minorca.  A grateful nation buried him next to Nelson at St. Paul’s.  Several Royal Navy warships have taken Collingwood’s name, and the current Maritime Warfare School is HMS Collingwood. 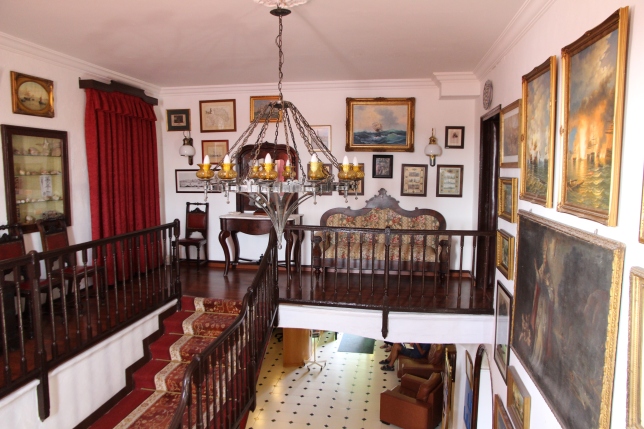 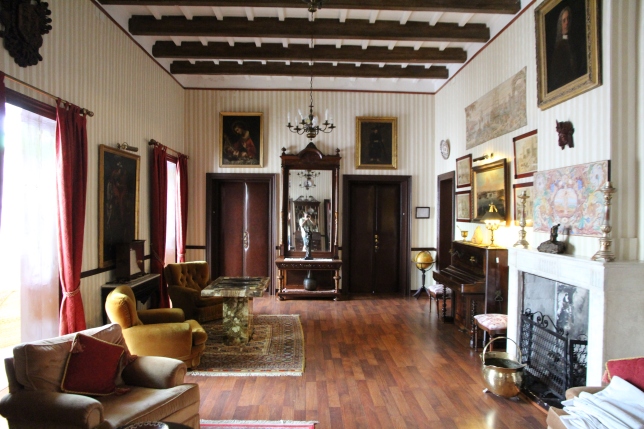 Collingwood House also claims a U.S. Naval Heritage.  Knowing of my interest, one of the hotel staff kindly pointed out the following painting showing a U.S. frigate at Port Mahon.  I thought it was probably in the Mediterranean as part of the U.S. Navy’s efforts directed against the Barbary pirates and my subsequent research showed that was the case.  Apparently, there are dozens of U.S. sailors buried in the Anglo-American cemetery at Port Mahon and the U.S. Navy has made efforts in recent years to schedule port visits there.

The Stars and Stripes flying from the Jackstaff of a U.S. Frigate in Port Mahon